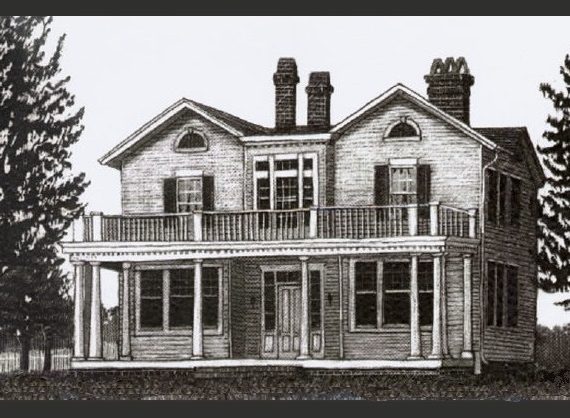 is headquartered in Linden, an Italianate two-story frame dwelling built in 1868, with Colonial Revival additions constructed In 1907. It sits on 4.3 acres surrounded by mature trees, lush lawns, and numerous 19th century outbuildings.  The main entrance from Church Street is the original farm lane that still leads to a circular drive and the front of the house. The lane branches off to what had originally been the stables and barn area, and now leads to the archives parking lot.  Linden is classified as an “Urban Farmscape,” and is a Calvert County Historic District, a Maryland Historical Trust easement property, and is on the National Register of Historic Places.

Linden (as we call it now) was built the same year (1868) Henry Williams, a lawyer and son of the rector of All Saints Church, married Georgiana Weems. Her father, Mason Locke Weems, was the owner of the Weems Steamboat Line. The family had increased by two young daughters when, seven years later, they moved to Baltimore where Williams took over management of the company and propelled it into its most successful years.

Daniel Magruder, another lawyer and the youngest judge in the 7th Circuit, bought Linden in 1875. An Annapolis native, he had been living in Dare’s Hotel in Prince Frederick for several years, had married Mary Sollers, sister of Solomon Sollers, the Calvert County Clerk of Court, had seen a daughter and then a son born, and had buried the infant son in St. Paul’s churchyard. The small family had lived in Linden only a year when his wife Mary died, and she too was buried next to her son at St. Pauls. Magruder’s mother-in-law and sister-in-law moved into Linden to care for the child and the household while he attended to court issues and the businesses he owned in Prince Frederick: his law office, the Hotel, and a Dry Goods Store.  Magruder had also been elected president of the Drum Point Railroad, and spent many hours and invested much of his own money into that proposed enterprise. Can it be a coincidence that the train’s route was to pass through Prince Frederick just steps away from his own front door, at the intersection of Church and Main?

In 1881 the businessman who held Magruder’s mortgage on Linden died, and his heirs were forced to call in the loan. In order to pump money into the Drum Point railroad scheme, Magruder had extended the loan several times, and fallen short in successive payments; he had also reduced the insurance on his holdings in Prince Frederick. And then, on March 3rd 1882, the final blow was struck: a raging fire not only burned down the Courthouse, it also destroyed everything he owned in town: his law office, the Hotel, and the Store.  Since it was located on what was then the outskirts of town, Linden survived, but Magruder was once and for all defeated. He and his daughter returned to Annapolis where he remarried the following year. He continued to fight court battles for years to come, contesting the foreclosure of Linden, collecting what he could on his insurance losses in Prince Frederick, and hoping the Drum Point Railroad would restore his solvency.  The Railroad venture was doomed and eventually went bankrupt, as nearly did Magruder. Linden was offered to the highest bidder on the steps of the (rebuilt) Courthouse 1888.

Local lawyer John B. Gray, jumped at the chance.  His competition was another lawyer,  John P. Briscoe, who had the added advantage of being a close personal friend of Magruder’s, and was keen to be Linden’s next owner. But Gray prevailed and purchased Linden, with the promise to Magruder, that Briscoe and his wife could rent Linden while they built a home of their own in Prince Frederick; their home, Old Fields, was finished late the following year.

Kate Lavielle Dorsey Gray and her husband finally moved into Linden in1890 with their two small daughters; a third daughter and three sons were born over the next ten years. Gray’s law practice was within walking distance in Prince Frederick, and his farm operation, which provided for much of the household needs, surrounded the lovely home they were quickly outgrowing. In 1907 they added a two-story addition onto the back of the house and enclosed the existing front porch, adding a larger, columned front porch that spanned the width of the house.  Although we think of the house as being “Linden” since the foundation footers were laid, it was the Grays who planted the linden trees that gave the house its name.

A front view of the Linden House at the Calvert County Historical Society. The house was built in 1868. This is site was selected for a Heritage Fund Grant in 2008.

The Gray family owned Linden for 100 years. Starting in the 1930s, upstairs rooms were rented to female teachers and for a while, during WWII, to the wives of servicemen stationed at the Naval Amphibious Training Base in Solomons. Eventually, the elderly Gray sisters, Miss Sadie and Miss Marguerite, were the only Gray family members still living in Linden; their brother, Judge John B. Gray lived just to the west in the house where he and his wife raised their own children. After the last Gray sister died in 1988, Judge Gray sold the house to St. Paul’s Episcopal Church, where scores of Gray family members had been baptized, married, and buried over the years.  Linden’s location made it inconvenient as either a rectory or a church hall; eventually it became Project Echo, a homeless shelter.

In 1990 Linden was sold to the County, with the understanding that it would become the new home of the Calvert County Historical Society. CCHS agreed to rent Linden for $1 per year and finance the building of an archives wing behind the main house, and the rehabilitation of Linden itself. Through the efforts of many dedicated members, volunteers, independent donors and State agencies, the archives wing was opened in 2000, and the rehabilitation of Linden was completed in 2005.